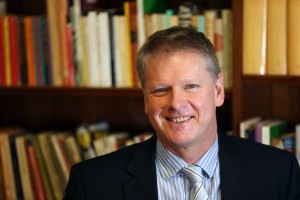 Professor Riordan taught English as a foreign language at Julius-Maximilians-Universität Würzburg in Germany (1982-84) and was Lecturer, then Senior Lecturer in German at Swansea University (1986-1998). He became Professor of German at Newcastle University in 1998, where he remained until his move to Essex in 2007. He has published widely on post-war German literature and culture, including editing books on the writers Jurek Becker, Uwe Johnson and Peter Schneider. Other research interests include the history of environmental ideas in German culture.

He is a Vice-President of Universities UK and a Board member of the Leadership Foundation for Higher Education, the Edge Foundation, UCAS and the Equality Challenge Unit. In 2013 he became chair of Universities Wales, the body which represents the interests of Higher Education Institutions in Wales. He is also a member of the Cardiff Capital Region Board and sits on the Review of Higher Funding & Student Finance in Wales. As chair of the UK Higher Education International Unit, he is active in promoting and advancing the role of UK universities aboard. He is a member of the International Education Council sponsored by the Department of Business, Innovation and Skills and, in 2014, he became a Fulbright Commissioner.