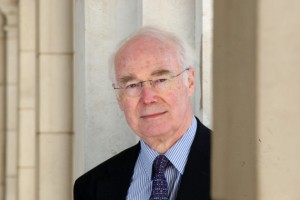 Professor Sir Martin Evans was the first scientist to identify embryonic stem cells, which can be adapted for a wide variety of medical purposes. His discoveries are now being applied in virtually all areas of biomedicine – from basic research to the development of new therapies. In 2007, he was awarded the Nobel Prize for Medicine, the most prestigious honour in world science, for these “ground-breaking discoveries concerning embryonic stem cells and DNA recombination in mammals.”

Sir Martin gained his BA in Biochemistry from Christ College, University of Cambridge in 1963. He received an MA in 1966 and a DSc in 1966. In 1969 he was awarded a PhD from University College, London. He joined the Cardiff University School of Biosciences in 1999.

Sir Martin has published more than 120 scientific papers. He was elected a Fellow of the Royal Society in 1993 and is a founder Fellow of the Academy of Medical Sciences. He was awarded the Walter Cottman Fellowship and the William Bate Hardy Prizes in 2003 and in 2001 was awarded the Albert Lasker Medal for Basic Medical Research in the US. In 2002 he was awarded an honorary doctorate from Mount Sinai School of Medicine in New York, regarded as one of the world’s foremost centres for medical and scientific training. He has also received honorary doctorate awards from the University of Bath, University of Buckinghamshire, University College London, University of Wales and the University of Athens. He was knighted in 2004 for his services to medical science and in 2009 was awarded the Gold Medal of the Royal Society of Medicine in recognition of his valuable contribution to medicine. In 2009 he also received the Baly Medal from the Royal College of Physicians and the Copley Medal, the Royal Society’s oldest award, joining an eminent list of previous recipients including Albert Einstein.